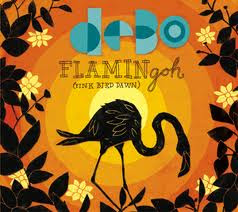 Debo Band
Flamingoh (Pink Bird Dawn)
Self-Released
Debo Band is an Ethiopian tribute band for the sounds of Ethiopia's 1970's golden era of musical creativity. With a new album of live material, the number of songs on this album only ring in at four. Despite this, Debo Band proves superiority with minimalism. The four songs are "Musicawi Silt" by Girma Beyene, "Belomi Benna" by Abrar Abde/Mahmoud Ahmed, "Mignoten Man Yawkal" by Seyfu H. Mariam/Tezera H. Michael, and "Lantchi Biye" by Menelik Wossenachew. The first track, "Musicawi Silt", is a groovy, guitar and horn-driven masterpiece that is entirely instrumental. "Belomi Benna" is led by vocalist Bruck Tesfaye with another fine horn section and driving melodies and rhythms. "Mignoten Man Yawkal" is led by vocalist Selamnesh Zemene and she matches the beats with a small degree of earthiness and attitude in all the right proportions. The final song, "Lantchi Biye", is the other song led by vocalist Bruck Tesfaye. This song almost borders on a Gypsy/Klezmer rhythm with a characteristic Ethiopian beat and tropical guitar stylings. Named after the peculiar and showy birds of the region, Flamingoh... is poised to make everyone dance around...including those creatures that are perched on one leg. ~ Matthew Forss