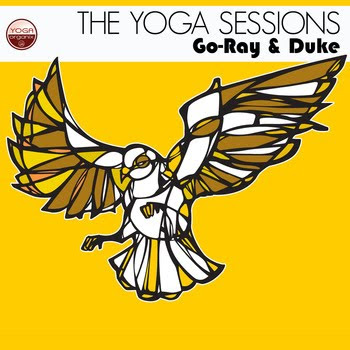 Go-Ray & Duke
The Yoga Sessions
Black Swan Records
As the title implies, one need not go very far to note the yoga references for Go-Ray & Duke's latest release, The Yoga Sessions. Sanskrit and Indian-infused elements grace the tracks of this one. Eleven tracks in all feature a few guest musicians notable in their own right, including Israel's Idan Raichel, Bansuri-flute master Steve Gorn, and hippest hip-hopper this side of Heaven, MC Yogi. The groovy beats of "Goddess Invocation" and Go-Ray's sensual vocals will summon anything and anyone within earshot. The other contemporaries in yoga music not associated with this album with a similar sound include Wah!, Girish, and Krishna Das. There are quieter moments, as well as hip-hop elements and jazzy-fusion with a trip-hop, electronica, and trance-like state of being. The addictive sounds of The Yoga Sessions are very desirable and they do not seem to wane long after the tracks are over. Though not traditional Hindustani or devotional music in the historical sense, Go-Ray & Duke set out to redefine the yoga vibes for a new generation. Try it today! ~ Matthew Forss
Posted by Matthew Forss at 11:50 AM