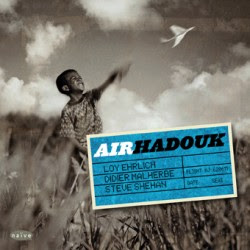 Hadouk Trio
Air Hadouk
Naive
The trio of Didier Malherbe, Steve Shehan, and Loy Ehrlich bring about a fusion product that encapsulates the essence of European, Middle Eastern, and North African sensibilities without sacrificing quality. Based in France, the trio formed its name from the first two letters of hajouj, which is a guimbri or lute indigenous to West Africa, and the last four letters of doudouk, which is an Armenian flute. The various instrumentation include gumbass, djembe, awicha, berber brushes, copper pot, sax, doudouk, conga, kora, khen, and others. The fusion feel of the album is evidenced by the mix of instruments and the absence of any vocals. In effect, the instruments are played in a way that evoke a jazzy-fusion continuum with odes to the African continent, Asian Diaspora, and Europe. Thirteen tracks and a seemingly endless supply of tones and moods signal the best the Hadouk Trio have to offer thus far. Air Hadouk will be touching down in a neighborhood near you...and you'll love it. ~ Matthew Forss
Posted by Matthew Forss at 9:45 AM