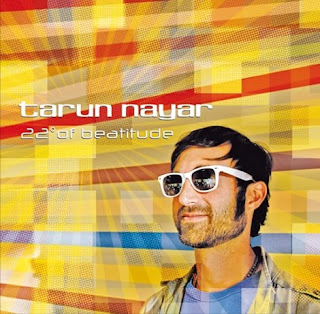 Tarun Nayar
22 Degrees of Beatitude
Chaiwalla's Boombox
Vancouver-based DJ/producer and electronica wizard, Tarun Nayar, is a global pioneer of Indian fusion and dance music. 22 Degrees of Beatitude is an album of lighter dance music and electronica that veers away from heart-pumping, dub-thumping sounds. Tarun's other work as a tabla and electronics guru with the Delhi 2 Dublin group certainly shaped and beautified his current release. The songs are mostly instrumental with little vocal accompaniment, except on "Innocence", "Kezang La", and "Mamaji". Taking the lighter side of dance music, Tarun shines with trippy, trance-inducing compositions without fatigued results. With titles as diverse as "Kezang La", "808s and Sheikh Sarai", and "Mamaji", the album is bound to be an intriguing journey through the aural sounds of the world. In fact, the double-pronunciation of 'beatitude' and 'beat-itude' still means utter bliss or happiness. Tarun Nayar is sure to conjure up loads of happiness wherever his tunes are played and performed. ~ Matthew Forss
Posted by Matthew Forss at 7:45 AM