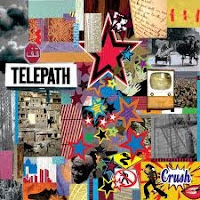 Telepath
Crush
Telepath Music
Telepath is the brainchild of Michael Christie and it is composed of several musicians from around the world, including Jamaica, Africa, India, and the USA. The third release, Crush, is sure to keep up the beat of global trip hop, downtempo, dancehall, and electronica. A fresh and engaging sound is one of the most important hallmarks of Telepath. The groove-laden beats are especially attractive on "Justify", "In This Time", "Mama", "Carry The One", "Freedom", and "The Ancient Ones". The Bhangra beats of "Dust" and Indian-influenced "Rohi" and "Down The Block" possess definite Bollywood similarities. The tracks are mostly vocal and incorporate many instruments including snake charmer, keyboards, drums, bass, guitar, flutes, tumbi, violin, sitar, trombone, sax, and trumpet. "Critical Mass" is a psychtronica-driven, Balkan and Indian-fusion song of electronic excellence. A nice mix of sounds, instruments, and a globally-enveloped set of songs provides a well-balanced and most of all, intriguing collection of singers and rhythms from around the world. With a name like Telepath, you know it's going to be good before you even listen to it! ~ Matthew Forss
Posted by Matthew Forss at 7:43 AM