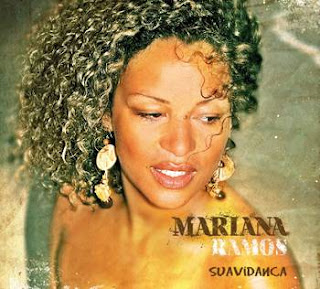 Mariana Ramos
Suavidanca
Casa Verde Productions
The Senegalese-born and Cape Verdean resident, Mariana Ramos, sings about life, love, and society on her fourth and latest album, Suavidanca. Of course, Mariana possesses a suave, vocal quality that is evidenced on anything she sings. The subtle tropical, Latin, African, and European musical influences are evidenced by her musical guests, including Benin's Angelique Kidjo on "Nzinga Mbandi" and another Cape Verdean, Jorge Humberto on "Discunfiado." The faster rhythms of "Beleza" is sure to heat up any cold night. Mariana sings in languages that are influenced by Portuguese, Creole, and French. The musical styles native to Cape Verde include coladeira, batucu, funana, morna, and mazurca, with other sounds borrowed from Latin America and Afro-Latin variaitons. There are quieter moments, as in "Discunfiado" and "Irmon," but that does not make them forgettable. As expected there are some comparisons to Cesaria Evora, but they are mainly instrumental and not vocal. The instrumentation is fuller than most Cape Verdean recordings and this one is no exception. If you are seeking sun, songs, and some relaxation, then Suavidanca is a perfect Spring Break getaway...all year-round! ~ Matthew Forss
Posted by Matthew Forss at 9:14 AM