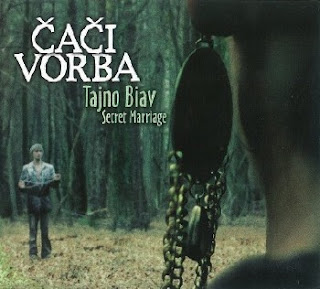 The Polish-Ukrainian band, Caci Vorba, releases their newest album that does not depart from previous influences and elements. For instance, Tajno Biav contains the same driving rhythms and melodies from the Balkan region and Gypsy traditions of Eastern Europe. There are songs from Hungarian, Russian, Romanian, and Bulgarian dance, fiddle, and waltz traditions with all the fixings (i.e. musical elements) for a good time on Friday night, or any other night for that matter. The music is never dull and it changes from contemplative, playful, fast-paced, to slow, relaxing, and thought-provoking. The female lead vocals and male backing vocals follow the music closely without overtaking the instruments. The violin, spoons, accordion, guitars, tambourine, darbuka, bouzouki, mandolin, baglama, and dumbek provide a nice blend of European and Middle Eastern elements. Still, the music is firmly rooted in the Gypsy traditions of Eastern Europe. Caci Vorba succeeds again with an album that will not remain secretive for long! ~ Matthew Forss
Posted by Matthew Forss at 12:07 PM