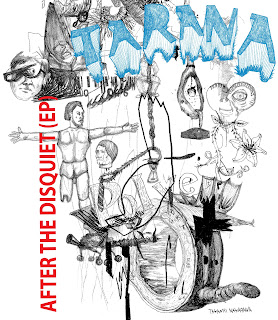 Tarana
After The Disquiet (EP)
Self-Release

Tarana's live release of four songs recorded at The Bop Shop in Rochester, New York on March 8, 2011, borders on Indian, classical, downtempo, and electronic genres. The amalgamation of sounds from drums, electronics, and Trina Basu's violin, provides a solid, improvisational-like quality to the music. The four songs are: "Disposable," "Night Song," "Black Teeth of Trees," and "Hava." Actually, "Have" and "Disposable" are the only two songs directly influenced by India, while "Black Teeth of Trees" is a stirring ode of electronica delight without all the showy trance or dance beats of the hottest night-club. Instead, the song weaves its way through a dark world of odd sounds and the drone of a violin. "Night Song" is jazz-influenced and a musical nod to jazz-bassist, Wilber Morris. The wholly instrumental album is a modern romp in the world of spacey, urban, and ethnic electronica. Despite its short length, Tarana creates memorable tracks that seem to last a lot longer than time would allow. Still, adventurous electronica fans with an Indian twist would relish this release the most. ~ Matthew Forss
Posted by Matthew Forss at 5:37 PM