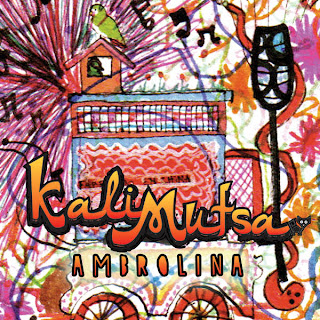 Kali Mutsa, also known as Celine Reymond, is a Chilean actress and singer. Now, Kali is releasing her latest recording of seven relatively short songs. Her influences stem from Andean popular music, to Gypsy, Bollywood, Spanish, and electronic experimentation. The sounds are rather mixed with different melodies, punchy percussion, and expressive vocals that fall somewhere between Shakira, Lady Gaga, and Cibelle. The urban and not-so-urban lyrical wordplay is certainly steeped in South American sensibilities without the typical pan pipes and accordions indicative of folk or roots music from the region. The swirling melodies and alternative percussion makes Ambrolina rise above the average fanfare and solidify her mark in the world of Chilean trance-pop. The songs are diverse enough to keep one interested. If you are interested in popular Chilean music, then add Ambrolina to the list of must-haves! ~ Matthew Forss
Posted by Matthew Forss at 1:16 PM