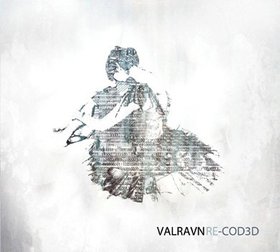 Hailing from the Faroe Islands, Valravn is an experimental, roots, and electronica group that is in the same vein as Garmarna, Sorten Muld, and Gjallarhorn. Coming from a Scandinavian-like musical background, Valravn's music has been remixed, or in this case--'re-coded'--as songs from previous albums are reinvented on this current release. Remixes are provided by the famous Carmen Rizzo, as well as Omnia, ORKA, Transglobal Underground, Euzen, Faun, Soren Bendixen, The Kenneth Bager Experience, Midi Lidi, and Pawel Rychert. The songs are a bit quirky, dark, and uptempo in an alternative way without resorting to flashy dance tracks or light and airy elevator music. There are male and female vocals. Valravn's remix masters came from all over the world to work on this project, including Poland, Norway, U.K., Netherlands, USA, Denmark, Germany, and Czech Republic. Re-cod3d is a solid release for fans of previous material. However, the contemporary setting may attract a new crowd. At any rate, the music of the Faroe Islands is on the map for world music fans! ~ Matthew Forss
Posted by Matthew Forss at 11:28 AM