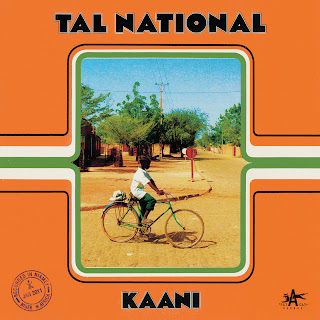 Niger's Tal National is led by Almeida (aka Issoufou Moumine), a leading guitarist from Niamey by night and court judge by day. The music draws upon West African rhythms, soukous, Afrobeat, blues, and rock. The rippling guitars, energetic percussion, and floating vocals represent the great Saharan song traditions in a contemporary setting without straying too far from their Zarma, Hausa, and French linguistic roots. The music is more danceable and structured than other nomadic tunes from the region. The music is also more rooted in rock and blues than full-on traditional arrangements. Nevertheless, the eight long tracks are particularly enthralling and full of dance-floor power. The throaty vocals, fast percussion, and meandering guitar grooves are what makes Kaani shine the most. Still, there isn't anything off-putting anyway. Explore Niger's desert grooves with one of the most influential and hard-working purveyors of the region--Tal National! ~ Matthew Forss
Posted by Matthew Forss at 5:18 AM