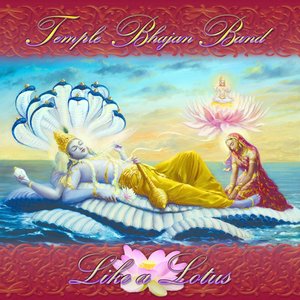 The California-based, Temple Bhajan Band, creates moving and religious kirtan chants and songs with a numerous cast of vocalists and instrumentalists. Some of the instruments include cello, bass, flute, tamboura, sitar, mrdunga drum, cajon, ektar, harmonium, guitar, and sax. The drone of the harmonium and meandering drum beats combine with the repetitious chants to form a memorable and awe-inspiring musical journey. There are nine tracks in all, but two of them are spoken word tracks with minimal instrumentation. The other vocal tracks include, Nam Pankaja, Jaya Radhe, He Govinda, Hare Krishna 1, Haraye Nama Krishna, Jaya Jaya Sita Rama, and Hare Krishna 2. The songs are rather traditional with many of the songs familiar to those into kirtan, yoga, or chant music. The songs are complex and highly-textured with sounds from South Asia and lyrics in English and Sanskrit. Like A Lotus is a remarkable album for the inner soul seeking outward happiness. ~ Matthew Forss