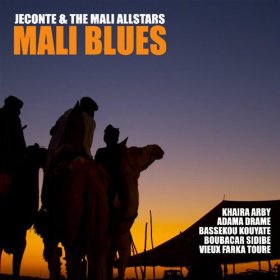 The rise of Mali blues music in the 1990s gave way to several notable performers in Africa and beyond. Perhaps, the best known is Ali Farka Toure. Ali is mentioned on a track, but his son, Vieux, adds vocals and guitar accompaniment on "Le Monde Pour La Paix." JeConte is a vocalist and harmonica-bluesman from the USA. JeConte is joined by a plethora of star-studded appearances by Souleymane Ann, Khaira Arby, Sidiki Camara, Doussou Koulibaly, Bassekou Kouyate, Moustafa Kouyate, Boubacar Sidibe, Adama Drame, Mahamadou Kone, Sekou Bah, and Vieux Farka Toure. The entire production is rather organic with laid-back, swirling rhythms and melodies marking the blues genre with an international flavor seldom-seen before. The project was recorded over a two-year period in Bamako, Mali. There are twelve tracks that showcase African blues music and the awareness of the people from Mali. The guitar work gets a little rambunctious at times, which is not particularly deleterious. Anyone into Malian guitar music and blues tunes will love JeConte & The Mali Allstars. ~ Matthew Forss
Posted by Matthew Forss at 2:55 PM