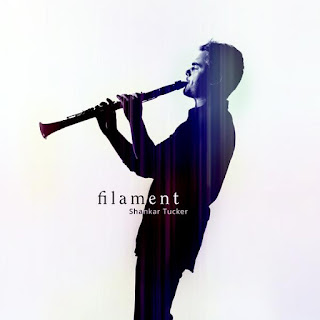 Shankar Tucker's new album, Filament, brings together neo-classical stylings, Hindustani classical music, and Western traditions in a contemporary context for both voice and instrument. Shankar is a clarinetist, but also adds vocals, guitarist, keyboardist, pianist, and percussionist to his list of talents. The wildly effervescent clarinet on "Chal Chal Sakhi" is especially intriguing, along with the vocals of Ankita Joshi. The heavily-laden cast of musicians on "Aa Re Chanda" brings out the classical, contemporary dance, and Indian music across form different forms: alaap, exposition, improvisation, and tillana. The vocals of Vijay Prakash on "Dil Hai Namazi" are very serene and ballad-like. The song is backed by Shankar's clarinet with tabla, cello, drums, keyboards, and guitar for a more modern arrangement. The more modern "Kashti" contains all the great tabla rhythms, percussion, and clarinet, but it adds the sweet vocals of Nikhita Gandhi for a truly remarkable result. Overall, Filament turns out to be the real-life thread that bridges the musical gap between the East and the West. ~ Matthew Forss
Posted by Matthew Forss at 1:10 PM