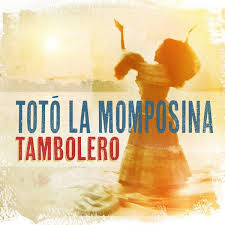 Colombia's Toto La Momposina has done for Colombia what Cesaria Evora did for the Cape Verdes--bring vibrant, traditional music to the indigenous peoples, as well as people and cultures beyond their respective country's borders. Spanning nearly sixty-years in the musical realm, Toto La Momposina brings together the ethnic influences of African, Indian, and Spanish roots for a re-imagined hour of music originally released in 1993 as La Candela Viva. My first taste of Toto La Momposina's music began in 2000 with Pacanto (World Village). The same musical styles are present, but Tambolero is more rhythmic, dynamic, and percussion-friendly. There are dance-worthy tunes throughout. The fusion of traditional South American and Latin American instrumentation and melodies makes this one stand-out from 'typical' Latin or Spanish releases. A dozen tracks grace the album with tons of traditional elements and vocal gems. There are airy flutes on "Curura" and rapid hand-claps on "Gallinacito." Other attributes include heavy percussion, poignant ballads, and mesmerizing and complex melodies--which are also quite timeless. Fans of tropical, folk, traditional Spanish, Latin, South American, and Colombian music will be fascinated by the colorful tunes of Toto La Momposina's Tambolero. ~ Matthew Forss
Posted by Matthew Forss at 12:02 PM