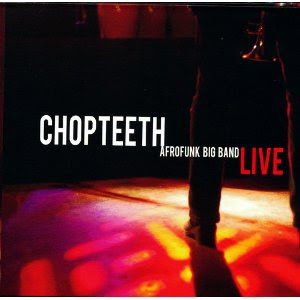 Chopteeth
Live
Grigri Discs
Chopteeth is back with a live set of resurrected Afrofunk and Afrobeat tunes from Africa's greats including Fela Kuti, Tabu Ley Rochereau, Le Shimandou de Beyla, and Peter King. Of course, the band focuses on other tunes by Ignacio Rios, Rudy Gomis, Ndeye Mbaye, Barthelemy Attiso, Arthur Kennedy, Michael Shereikis, and Duke Ellington. The D.C.-based band is a purveyor in the golden age of African funk music. The classic 1970's tunes are mainly instrumental with plenty of brass, drums, keyboards, electric guitar, and bass. The ten songs were recorded at a few different locations around D.C. The audience participation is minimal with only a smattering of applauses or shouts. The groovy beats are a perfect accompaniment for a thriller or suspense film soundtrack. Chopteeth is a delectable band that always brings the brass with the sass. ~ Matthew Forss
Posted by Matthew Forss at 11:31 AM