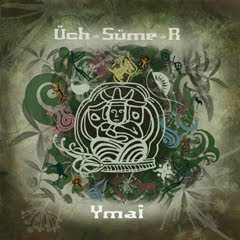 Uch Sume R
Ymai
Sketis Music
Uch Sume R is a group of musicians that bridge the gap between historical and modern folk music from Khakassia in south-central Siberia. The second half of the album features the music of Khakassian singer, Alisa Kyzlasova. Uch Sumer is the second highest mountain in Russia, which borders three countries: China, Mongolia, and Kazakhstan. It also means 'three wisdoms' or 'three peaks'. The albums title, Ymai, is an ancient Turkic Goddess of motherhood, love and fertility. The lively songs are mostly traditional folk and throat-singing tunes that incorporate a range of local and regional musical instruments that provide an authentic and organic sound. Anyone looking for songs of the Altai mountain range, or Central Asia, will find Uch Sume R to be an outstanding addition to any collection of folk music. Liner notes in English and Russian. ~ Matthew Forss
Posted by Matthew Forss at 8:51 AM