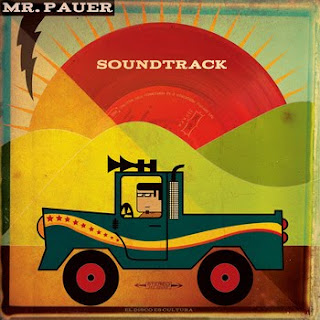 Mr. Pauer
Soundtrack
Fabrika Music
Mr. Pauer, otherwise known as, Toto Gonzalez, is a Venezuelan-born, Miami-based DJ, producer, and remix king. His latest release, Soundtrack, is the result of a lifetime living amidst tropical locales. The tropical elements of Soundtrack come through on the Spanish vocals and the Latin-beat sound. The electronic sounds and noises perfectly fuse with the tropical beats. Soundtrack's seemingly limited seven-track listing is easily compensated for with shots of diverse dub, funk, electric, cumbia, and Spaghetti Western-type music that fill the soul and move the body. Somewhat instrumental and somewhat vocal, Soundtrack is a groovy release unlike any other. It is fresh, modern, creative, and magical. The incredible instrumental zone of "Que Si Que No" and "Escaping" prove his musical abilities. The tropical beats of "Mente De Mente" are also very special in their own right. Let Mr. Pauer be your guide to the tropico-electric club grooves of Florida and Latin America. ~ Matthew Forss
Posted by Matthew Forss at 12:41 PM