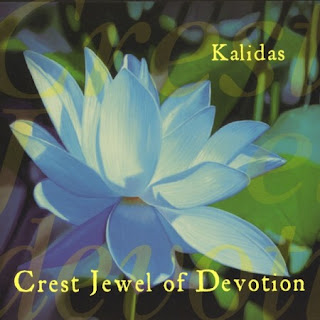 Kalidas
Crest Jewel of Devotion
Self-Release
For meditative explorations of the Far East, one must not look any further than California-based, kirtan singer and instrumentalist, Kalidas. Kalidas is named for a servant of Kali, which is a goddess that represents a destruction of the ego in the Hindu tradition. Kalidas' kirtan singing is in Sanskrit and includes special guest vocalist, Beth Searcey. Instrumental accompaniment is provided by Kalidas' harmonium and synthesizer, but also the djembe drum. A chant-lovers paradise, Kalidas' soothing vocals resonate nicely with the simplistic instrumentation and melodies. The chant verses stick with you long after the tracks ends. Eleven tracks are included, but the last two tracks are not listed in the liner notes, because they are hidden tracks of "Durge" and "Kali Durge". Other fine tracks include "Ganapati", "Jai Ambe I", "Govinda", and "Jai Ma". Crest Jewel of Devotion is a fine recording for anyone seeking musical transcendence and relaxation. ~ Matthew Forss
Posted by Matthew Forss at 10:22 AM