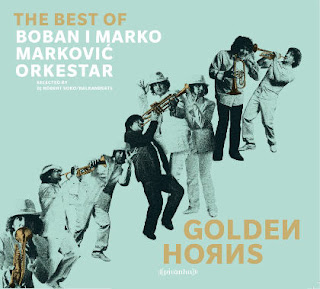 Golden Horns is an album that features the best music from Serbia's Boban i Marko Markovic, as well as his son, Marko, and other hits composed by Husnu Senlendirici, Ljiljana Kolakovic, Lajko Felix, T. Lato, T. Kukurba, and others. The Balkan brass hits are compiled by DJ Robert Soko, who also contributes to the bonus tracks, ''Cinnamon Girl" and "Go Marko Go." The rousing brass and dancefloor melodies are Romani-influenced and Gypsy-celebrated with plenty of majestic horns, whirling rhythms, and catchy tidbits that are a must-have for any celebratory situation. There is even a little rap on "Sljivovica." The music is great for parties, enjoying music from Boban's highlighted career, and learning a bit about Romani music. The mostly instrumental tunes do contain some vocals, though the instrumentation is the real winner here. Fifteen tracks round out the album. Vocals in English, French, and Serbian. ~ Matthew Forss
Posted by Matthew Forss at 2:39 PM