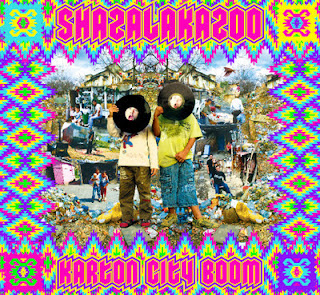 The contemporary electronic group from the Balkans, Shazalakazoo, is an innovative band with a strong mixture of diverse musical styles, vocals, and rhythms. For instance, the Serbian band incorporates a bit of Latin, Middle Eastern, and Mediterranean influences into their repertoire. Though, the electronic elements are not particularly evident--instead, the urban, almost hip hop vocal deliveries, contain an inherent popular feel without resorting to rock or pop idioms. The fifteen tracks are inspired by the cardboard or shanty towns of the Balkans and other areas of the world. The danceable rhythms and melodies reflect an upbeat tone throughout. The powerful melodies and instrumental prowess of Balkan brass or Klezmer music is not particularly absent here. Fans of urban, Balkan, and electronic bass music will love the hip tunes of Shazalakazoo. ~ Matthew Forss
Posted by Matthew Forss at 3:55 PM