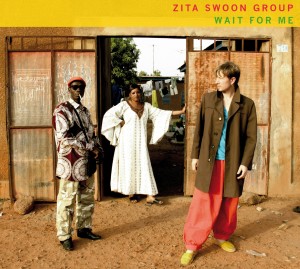 The Belgium-based world-beat group, Zita Swoon, is a cosmopolitan band representing a host of musical styles that cross the wide, Saharan expanse of North Africa and the Western European region of France, Belgium, and England. The engaging rhythms are showcased on a number of instruments, including drums, balafon, guitar, horns, various folk instruments. The wide-ranging vocals and incredible repertoire of Awa Deme, Mamadou Diabate Kibie, and the Paul Simon/Bob Dylan singing-leadership of Stef Kamil Carlens, produces a solid recording of memorable songs. The balafon and horns represent a West African and Ethiopian sound on the same album. The world music created by Zita Swoon Group is a form of fusion, but it almost works too good to be called fusion. Instead, the music is just great--no matter what you call it. ~ Matthew Forss
Posted by Matthew Forss at 1:50 PM