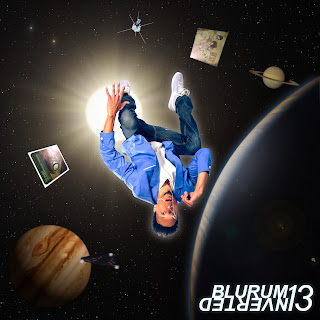 BluRum13 was born in New York and based in Maryland, but his verbose beauty represents many different genres and world fusion styles. However, the primary genre revolves around rap/hip hop, and jazz. The lounge music is rather urban, too. The poetic verbal flow of "Venga" is relatively trance-heavy with jazzy interludes of punchy brass, languid electronics, and an atmospheric beat that echoes and reverberates with underground liveliness. "Cereal" is another exciting track, but the verbal wordplay is a bit more energetic and the instrumentation is much faster. "TLO" contains a lot of electronic swishy sounds, rap vocals, and progressive rock beats. "Distortion" is a rather languid down-tempo masterpiece with glittery sounds, fluid soul elements, and swishy noises with urban vocals. "Quixotic" is punchy and rhythmic with Eminem-like tendencies with much more intelligence and creative juices shining through. The diverse, urban creations of BluRum13 are something to ponder, since each listen reveals something new and fresh. ~ Matthew Forss
Posted by Matthew Forss at 7:31 PM