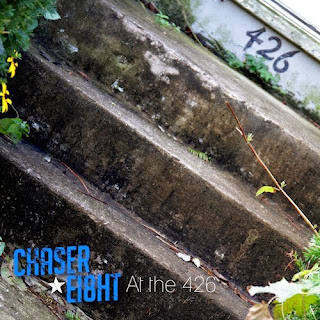 Chaser Eight
At The 426
Self-Release

Chaser Eight, a Connecticut-based band, follows up with a new EP that continues to explore honest, wholesome, and meaningful vocals and catchy melodies. The entire project was recorded, mixed, mastered, and produced at 426 Studios. "One Love" opens with an acoustic guitar and the sweet, emotive vocals of AUDRA. There are symphonic strings that accompany the vocals and guitar throughout. Drum percussion and jazzy sounds kick in mid-song. The last few moments of the song merge into a rock guitar frenzy that does not last too long. "Run, Run" is a more rock-centered tune with female vocals and an upbeat guitar tune that is grungy and attitude-driven. "Without Love" is a previously-released track that takes on a blurby, electronic, and swishy tune. There are down-tempo, electronica elements that provide a more mysterious and experimental approach. "Heart To Heart" and "Never Enough" are both similar in terms of pop/rock beats and tempos. The earthy sounds are genuine and very moving. Nothing is off-key or off-kilter here. ~ Matthew Forss

Posted by Matthew Forss at 8:51 AM

Thank you so much for your review of At the 426. We appreciate all the kind words.