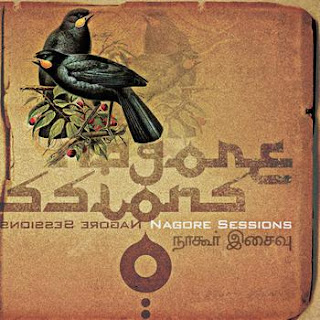 Various Artists
Nagore Sessions
EarthSync
The Sufi-inspired chants of Abdul Ghani, Ajah Maideen, and Saburmaideen Babha Sabeer from the Nagore Dargah, or shrine, in Tamil Nadu (South India) are backed with traditional instrumentation and modern beats. As a whole, the music is more traditional than electronic. At any rate, there is a nice balance of vocals and instrumentation without distracting the flow of the album. The chants, sung in Tamil, are borrowed from traditional Indian texts. The simplicity of the singing is easily accessible for fans of Indian music, Bollywood, and Kollywood (South India) music. The traditional frame drum, strings, tabla, sitar, harmonium, and others, reflect the history of the songs. The music takes on a Middle Eastern, Central Asian, and Indian sound similar in tone to Pakistan's Rizwan-Muazzam Qawwali. The symphonic beats, Sufi singing, and traditional sounds make Nagore Sessions a must-have for any music fan! ~ Matthew Forss
Posted by Matthew Forss at 2:41 PM