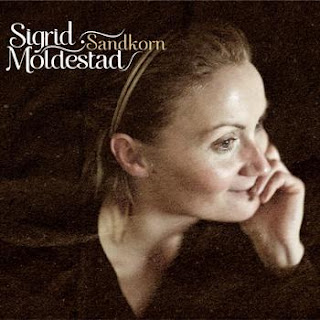 Sigrid Moldestad
Sandkorn
Grappa
Sigrid, which is an old Norse word for 'victory', wows audiences with her vocals and Hardinger Fiddle playing. Norwegian by birth and residence, Sigrid recently received the Folk Musician of the Year Award (2010). Sandkorn, which means, 'grains of sand', is littered with little gems. The instrumental "Uncle J", sincere "Ein Sael Kyss", darker "Gata", the vocal duo with Kim Andre Rysstad on "Maneskinslandet", and the lively "Frostroyk" highlight her talent. Some of the songs are inspired by the poems of Robert Burns and Jakob Sande, while others are traditional and original tunes. The instrumental repertoire includes a variety of instruments, such as the pump organ, piano, viola, guitar, mandolin, bass, baritone guitar, sax, saz, and others. Sigrid's almost theatrical playing and singing awaken an ancient musical spirit that is fresh with talent. Norway's shores gleam with the music of Sigrid Moldestad. The Norwegian lyrics are provided in the liner notes. ~ Matthew Forss
Posted by Matthew Forss at 12:30 PM