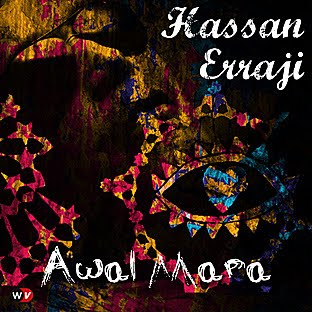 Hassan Erraji
Awal Mara
World Village
Multi-instrumentalist and blind musician, Hassan Erraji, is a Moroccan native with musical ties to the Atlas Mountains. Hassan plays the oud, qanun, violin, darbouka, keyboard, nay flute, and also sings on each track. Awal Mara, which means, "love at first sight", features background vocals by Hassan's daughter, Yasmin Erraji. The traditional instrumentation mixed with drums and bass creates a modern musical environment without delving into the outer reaches of electronica or dance music. However, every song has a high degree of danceability. The most striking musical similarity to Hassan's music is from the bellydance and ensemble music of Egypt, or even the music of the Arabian Peninsula. The Gnawan trance music native to Morocco is not featured here, however there are hints of it throughout. Awal Mara induces a state of intrigue with the country-esque "Mounyati" and the instrumental "Douka Dance". Think of it like 'Love At First Sound', too! ~ Matthew Forss
Posted by Matthew Forss at 1:40 PM