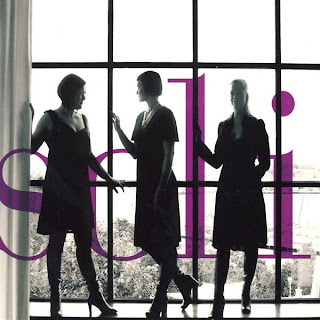 Bjorset, Teigland, & Hytta
Soli
Talik
Three Norwegian women perform solos (Soli) on Hardanger (Hardingfele in Norwegian) fiddles. Synnove S. Bjorset, Ase Teigland, and Anne Hytta play mostly historic tunes exclusively on the Hardanger fiddle. The Hardanger fiddle is indigenous to Norway and it is typically tuned slightly higher than the traditional violin. The women play a relatively equal amount of songs without grossly overshadowing each other's innate string talent. There are seventeen tracks in all. Importantly, the entire album does not contain vocals or other instruments and sounds. It is formulated around the Hardanger fiddling traditions of Norway without reliance on other musical accompaniment. The somber and seemingly spritely sounds of the fiddle showcase the immense diversity of classical Norwegian tunes. This is an instrumental gem for fans of the Hardanger fiddle, Norwegian or Scandinavian music, and folk music. ~ Matthew Forss
Posted by Matthew Forss at 6:47 AM