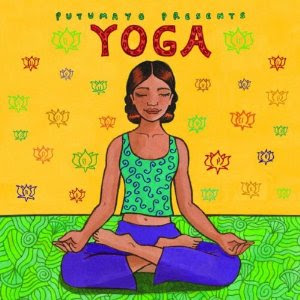 Various Artists
Yoga
Putumayo
The folks at Putumayo continue to release superb albums. Yoga is no different. As the title suggests, the music is quite relaxing and meditative. Though, it is more lively than other yoga music. A variety of artists from around the world contribute to the compilation. The project coordinator, Sean Johnson, among others, provides a track with the Wild Lotus Band on "Om Hari Om/Sharanam Ganesha". In addition, the Lucknow Project's Chilean singer, Sangeeta Levine, offers her vocals on the opening track, "Ghungate Ke". The husband-wife duo, Shantala, sing a melancholic "Purnamadah". Yoga-pop's star, Wah!, sings an edgy pop song about the Indian epic Ramayana on "Bolo Ram". The groovy "Cerulean" by composer and instrumentalist Ben Leinbach and Geoffrey Gordon on tabla are joined by Jai Uttal on dotar. The track is remarkably modern, but it still retains an element of tradition. Other artists such as Karnamrita Dasi, U.K.'s Niraj Chag, Amounsulu, Gaura Vani, Susheela Raman, Krishna Das, Ablaye Cissoko, Yogini, Volker Goetze, and Jean-Philippe Rykiel round out the list. This is a nice collection of mostly modern vocal yoga music for yoga or other occasions. ~ Matthew Forss
Posted by Matthew Forss at 7:08 AM