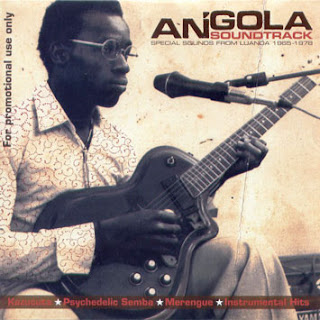 Various Artists
Angola Soundtrack: The Unique Sound of Luanda [1965-1976]
Analog Africa
The largely under-represented music of Angola's past, and present for that matter, is popularized thanks to the folks at Analog Africa. Angola Soundtrack... is the anthem for Angola's Afro-Caribbean musical traditions of the 1960's and 70's. Interestingly, the rhythmic guitar music and percussion are unlike most traditional African songs. In this case, the Caribbean and Latin influences far outweigh any traditional African sounds. Still purely African, the music is lively and carnival-esque, with a dash of psychedelic guitars, merengue rhythms, and semba music. Over fifteen different musicians from the era are featured on the album and a special 2-LP gatefold sleeve edition. Crisp, clear sounds and Latin grooves cement Angolan music in the annals of African music history. An invaluable and historic recording. The liner notes are heavily detailed and describe the music and musicians over forty-pages. ~ Matthew Forss
Posted by Matthew Forss at 1:35 PM