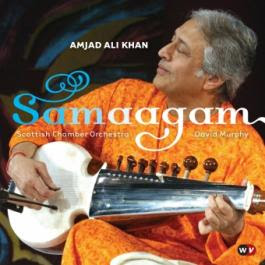 Samaagam, which is Sanskrit for "confluence" or "flowing together," is an astute and accurate title to characterize the sarod and orchestral music of Amjad Ali Khan and the Scottish Chamber Orchestra. The first three tracks are ragas that are each around seven minutes in length. The instrumental accompaniment is limited to the sarod and tabla without any vocalizations. The remainder of the instrumental songs are arranged in three groups with three songs developed by Amjad, seven traditional ragas in short duration of thirty seconds to just under four minutes, and the final set includes the same three ragas in the beginning set with orchestral accompaniment. Samaagam is an instrumental and orchestral fans paradise. In fact, some of the compositions resemble the classical music of the Mongolian steppes or Central Asia. Amjad is sure to strike a 'chord' with every listener within earshot. An informative booklet discusses the music in-depth in English and French. ~ Matthew Forss
Posted by Matthew Forss at 12:53 PM