CD Review: Mali's Mamadou Diabate Is Back With 'Courage' 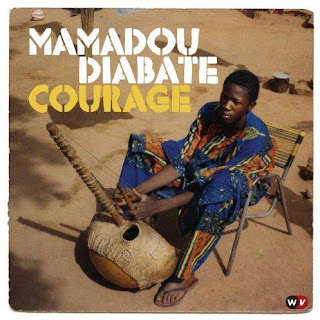 After Mamadou's 2009 Grammy-Award winning release of Douga Mansa, he follows up with an equally engaging and talent-driven release titled Courage. Even though the liner notes claim an innovative musical departure, the music still retains a pleasant, North African vibe of balafon, kora, calabash, acoustic bass, and ngoni. However, the kora is the primary instrument of song on this album. The twinkling strings are as smooth as glass and the other instruments seem to dance around the kora; almost worshipping its dream-like tendencies. Courage is completely void of vocals. In essence, the instruments 'sing' in their own unique ways. The balafon dances around on 'Kita Djely,' while the kora is the focus of the aptly-named 'Kora Journey' and the similarly-appealing 'Bogna.' Perhaps, Courage is named for the relatively new approach to kora music, but that does not make it any less attractive. For instance, the traditional instruments are the sole focus, while modern instruments and electronic arrangements are non-existent. Anyone with a preference for Malian music will love Mamadou's new work, but jazz, folk, classical, and New Age fans will find something special, too. ~ Matthew Forss
Posted by Matthew Forss at 7:25 AM