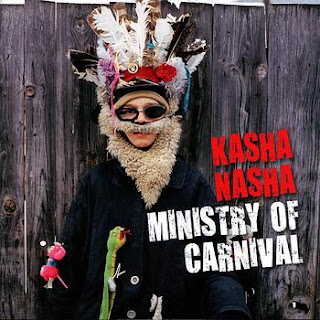 Kasha Nasha
Ministry Of Carnival
I-C-U-B4-T
Kasha Nasha is a band hailing from the Netherlands with a repertoire of Gypsy, European, and Russian musical tones. The prevalent Gypsy band element is surprisingly authentic, despite the fact none of the band members are of Roma descent. Still, the Bulgarian, Romanian, Moldovan, Russian, Hungarian, Macedonian, and Armenian influences are present throughout. The electric guitar shines through on a few tracks with the familiar Gypsy rhythms of brass and strings. A comedic track, "Horo Zhipoesjnetni," is an ode for Borat Sagdiyev from the film Borat. The fast-paced "High Speed Shoarma Eating Contest," the rocked-out "Worst Kaas Scenario," and the Cuban-tinged "Qbuzz," represent some of the diversity on Ministry Of Carnival. Whether you are Roma or not, Kasha Nasha proves that Gypsy music is fun, accessible, and in short, a riot. Ministry Of Carnival is a party of Kasha Nasha-nomic proportions! ~ Matthew Forss
Posted by Matthew Forss at 1:40 PM