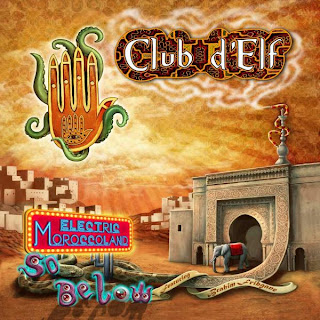 Boston is a long way from Morocco...and it isn't. Just listen to Club d'Elf's latest 2-CD set of Moroccan trance, dub, rock, and improvisational roots music. The Club assembles nearly two-dozen musicians with special guest star and sintir icon, Hassan Hakmoun. Nearly two-and-a-half hours of music and twenty-five songs span the entire collection. The Moroccan and North African percussion and rhythms are mainly the driving force behind Electric Moroccoland. So Below is more of a contemporary vision with a little more electronica, dance, dub, and techno than the other disc. In effect, the title connotation suggests an underground beat or music. Of course, anytime dance or club trance music is recorded it is not too far from the bellows of the underground scene. Thankfully, this music is enjoyed top-side for everyone to hear. The largely instrumental compositions encompass a range of tones, colours, and melodies -- all of them good. If you want to experience the trance, jazz, improvisational, and dreamy sounds of North Africa via Boston, then Club d'Elf is the place to be. ~ Matthew Forss
Posted by Matthew Forss at 12:27 PM