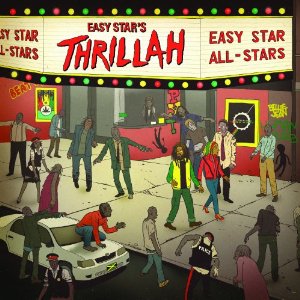 The Jamaican-reggae and Afro-soul funk styles of music come to fruition on this exciting new work of songs reinvented from Michael Jackson's Thriller. The music is largely progressive, but the songs are recognizable overall. Producer, Michael Goldwasser, brings in a variety of musicians and vocalists, including JoWil, Ruff Scott, The Green, Mojo Morgan, Steel Pulse, Mikey General, Spragga Benz, Michael Rose, Luciano, Cas Haley, Kirsty Rock, and Christopher Martin. Some of the songs included are "Baby Be Mine," "Thriller," "Beat It," "Billie Jean," and "Wanne Be Startin' Somethin'." The contemporary music contains grooves that are R&B-tinged, but the reggae vein is more pronounced. This is sure to appeal to fans of Michael Jackson's Thriller with a knack for other genres of music, including jazz, reggae, hip hop, and dance. ~ Matthew Forss
Posted by Matthew Forss at 7:40 AM