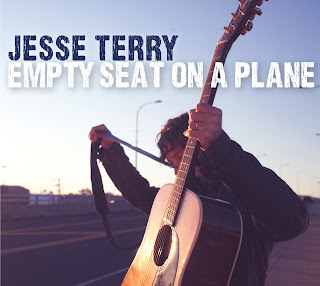 Jesse Terry's latest release of contemporary American folk-pop, Empty Seat On A Plane, traverses nostalgic folk styles of Ryan Adams and James Taylor, while forging his own path of light, roots-inspired folk-pop. There are also blues-tinged elements on some of the tracks. The bluesy, gospel-tinged "Bitterroot Valley," sets the standard for folk-blues with reverberating B3, grungy, sauntering electric guitars, strings, and soulful vocals. The folk-pop styles and vocals reflect a perfect male equivalent of Shawn Colvin's music. The scintillating "Scared Of Nothing," contains superb folk guitar leanings and alternative percussion that is dreamy and compelling. "Grace On A Train" contains tapping percussion, crystalline acoustic guitar strumming, and a few cymbal clangs near the end of the song. The entire song is rather reserved and slow in tempo. Nevertheless, the twelve songs represent a solid mix of acoustic folk-pop and Americana music in the vein of Shawn Colvin, Ryan Adams, Venice, and James Taylor. There would not be an empty seat anywhere Jesse Terry performs. ~ Matthew Forss

Posted by Matthew Forss at 8:46 AM