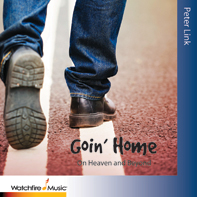 Peter Link's new Watchfire release is a true gospel cantata, which means musical compositions for voice and orchestra are based on spiritual texts. The thirteen-track release presents a slew of performers with a gospel and Broadway-esque singing style, including Jenny Burton, Margaret Dorn, Angela Clemmons, Keith Fluitt, John James, Kevin Osborne, Catherine Russell, Vaneese Thomas, Darryl Tookes, Julia Wade, Tom Tipton, and the blaring trumpet sounds of Barry Danielian. The music contains R&B melodies, gospel harmonies, and contemporary arrangements with percussion and piano. The soulful vocals work off of each other during many of the choruses. The classically-tinged, "Come To Me As A Bird," is a solemn Broadway-type tune with magical chimes and sweeping vocals with light string accompaniment and acoustic guitar. The scattered percussion of "I Ain't Gonna Grieve" sets a stylized dance tune of trip-hop with Western-type male vocals early on and female vocals join in by the end. This is not a particularly traditional tune, which is not a negative. "When The Saints Go" is a jazzy, dance-floor beat with soaring female vocals and blaring brass. An electric guitar adds a little frenzied music to the '80's-like arrangements to a traditional tune. There is a bit of funk and gospel ambiances that showcase the musical diversity throughout. Fans of gospel, Christian, Broadway tunes, and inspirational vocal music will find Peter Link to a beacon of light for all seeking musical (and soulful) salvation. ~ Matthew Forss
Posted by Matthew Forss at 11:19 AM