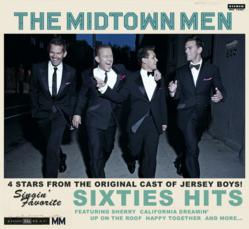 The original cast of Jersey Boys are now Midtown Men on this album of nostaglic ear-candy. The Midtown Men resurrect American pop songs from the 1960s on the aptly-titled Sixties Hits. Eleven songs represent a wide array of pop hits, including "Dawn," "Time Of The Season," "Ain't That Peculiar," "Candy Girl," "Up On The Roof," "Can't Buy Me Love," "California Dreamin'," "Big Girls Don't Cry," "Bye Bye Baby,'' plus several others. The execution of the songs is generally well-developed and fairly close in sound to the original hits with full instrumentation. The upbeat songs are well-suited for the vocal ranges of the Midtown Men. The flamboyant theatrical and Broadway-inspired antics are appropriately-suited for the songs on this album. The party-type song styles and feel-good music is highly-recommended for fans of pop hits from Americans golden era of music. Fans of the original artists will be pleasantly-surprised throughout. Give it a listen today. ~ Matthew Forss

Posted by Matthew Forss at 9:05 AM