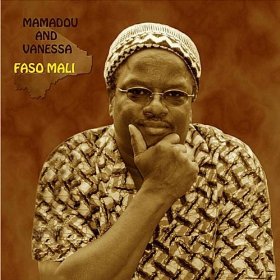 Malian blues are captured on the latest release from the Malian-native and California-based, Mamadou Sidibe, and his wife, Vanessa. The fifteen track release contains richly-textured songs loaded with great instruments indicative of Mali's Wassoulou region, including kamale ngoni, keregne, kousouba, balafon, calabash, djembe, guitar, accordion, and bass. To give listeners an idea of what the songs are about, one need not look any further than the track two: "Ali Farka." Though, the music is not steeped in electric guitar throughout, but it does contain the bluesy lines that made him popular with the world. Vanessa's playful "Beautiful Thing" is an an English song with folksy accordion and Mamadou's Malian vocals. Many of the songs contain bright melodies and heady rhythms that are both traditional and contemporary. In short, this is the best recording of Malian music this side of Timbuktu...literally. ~ Matthew Forss
Posted by Matthew Forss at 7:12 AM