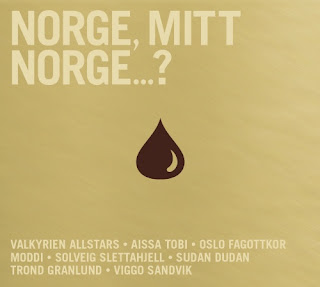 The national identity of Norway is preserved, yet reinvented, with historical songs made anew for today's generation. However, the songs are still folk centered and light pop with equal doses of classical and jazz. The title is translated as 'Norway, My Norway.' The music is arranged by Valkyrien Allstars, but Moddi, Aissa Tobi, Trond Granlund, Viggo Sandvik, Osla Fagottkor, Sudan Dudan, and Solveig Slettahjell have their hand in the mix, too. The thirteen track release is largely a folk music compilation that was recorded in an old Parliamentary room in Oslo, where the concept of Norway as an independent state was decided between 1814 and 1854. The music contains fiddles, drums, bright vocals, bass, and horns. The melody of "Deilig er Norden," resembles "Beautiful Savior"--a popular Christian hymn. Anyone with an interest in folk music from Scandinavia will love this one. ~ Matthew Forss
Posted by Matthew Forss at 12:04 PM