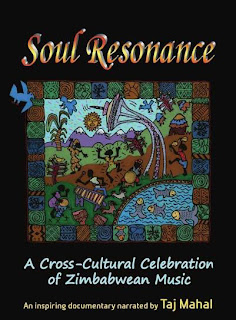 The opening sequences of the film include a few interview snippets with marimba musicians and various marimba (balafon) performances across the USA. Taj Mahal narrates the origins of Zimbabwean music with still images of maps, instruments, and people. The mbira origins were explored, as well as input from ethnomusicologist Robert Kauffman, musician Stella Chiweshe, the late-Ernest Brown, and Erica Azim. The development of British culture throughout the country threatened the indigenous music traditions of Zimbabwe, which was then preserved by Robert Sibson, who started the Kwanongoma College of Music. Zimbabwean music stars, Dumi Maraire, Thomas Mapfumo, and others are discussed. The rise of the marimba ensembles in America began with Dumi Maraire in the late 1960s. The rise of Shona music with mbira and marimba began in Seattle, Washington with the Minanzi Marimba Ensemble led by Dumi in the 1970s. During the 1980s, the spread of shona music traveled south through Oregon, while inspiring many communities throughout the Pacific Northwest. The website Dandemutande was created in the early 1990s in order to join others around the world with an interest in Zimbabwean music. Also in the early 1990s, the shona music sound spread eastward to other areas in the West. The final scenes of the film showcase a few different ensembles from various communities and schools with final thoughts by a few musicians and teachers. This a perfect film to expose world music fans to the wonderful world of Zimbabwean music in Africa and in the USA. However, this is primarily a traditional music production that surveys Shona music in the USA and not the guitar traditions popularized by many performers since the 1970s in Zimbabwe, including notable guitarist and singer, Oliver Mtukudzi. On that note, Soul Resonance is still a good buy for Shona music fans. ~ Matthew Forss