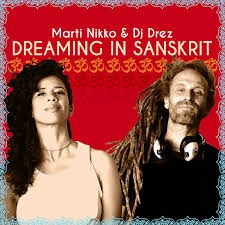 Blissful, electronic, and yoga-inspired, Dreaming In Sanskrit is the debut work of husband and wife duo, Marti Nikko and DJ Drez. The thirteen tracks are soaked with lush dub melodies, sitar-sizzling riffs, and down-tempo beats that cannot be ignored. Marti and DJ Drez are accompanied by Bansuri flute, cello, bass, sax, chinese flute, piano, flute, and tabla. The repeated Sanskrit mantras are very soothing and rhythmic, while backed by symphonic sounds and ambulating beats. There are even Arabic sounds on a few tracks, but the most prevalent influence is modern mantra and yoga-inspired music with lengthy melodies and electronic wizardry that is not too overt. Fans of yoga, meditation, down-tempo, groove-laden, and world fusion music will love. ~ Matthew Forss
Posted by Matthew Forss at 3:06 PM