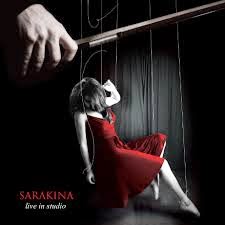 The Polish band, Sarakina, brings us a new album recorded during a live concert at Studio Rembrandt by Polish Radio Bialystok in Poland on February 23, 2014. The contemporary folk and Balkan musical connections are prevalent throughout with lush percussion and swirling rhythms led by strong, neo-classical vocals by Eliza Sacharczuk. Eliza's vocals are joined by kaval, bagpipes, tupan, tambura, clarinet, double-bass, and assorted percussion. The instrumental sections are vibrant, magical, and somewhat whimsical. The haunting and breathy kaval flute and organic drums, along with the dizzying sounds of the bagpipes, allows the album to explore various musical styles and influences ranging from the Mediterranean, the Balkans, Turkey, and Western Europe. There are some applause segments at the end of the songs, but it does not interfere with the flow of the album. The recording quality is excellent overall. Fans of Balkan folk, European folk, instrumental fusion, and lively world music will love Sarakina. ~ Matthew Forss
Posted by Matthew Forss at 9:09 AM