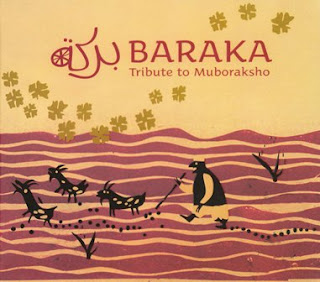 The late-Pamiri Tajik musician, Muboraksho Mirzoshoyev (1961-2000), was a pioneer of Tajiki popular music--especially in the 1980's and 90's. His music is reinvented by Baraka in a more traditional, classical, and jazz-centered atmosphere. This is not rock or pop. In fact, the music does not seem to possess any Tajiki similarities. The rousing percussion is slightly Middle Eastern, but equally European. The lilting melodies and outstanding vocals by Devika Evsikova and others make this Tribute... album stand-out from the crowd. The Central Asian, Persian, and North African-like percussion and wandering vocals make it apparent that Muboraksho was a composition master. The talents of Evsikova and a host of others on santoor, bass guitar, piano, sax, oud, guitar, flute, darbuka, congo, trumpet, and other fine instruments, provide a rich foundation for the original compositions. The music is ideal for fusion fans and those interested in traditional and classical Middle Eastern or Central Asian music. ~ Matthew Forss
Posted by Matthew Forss at 9:05 AM