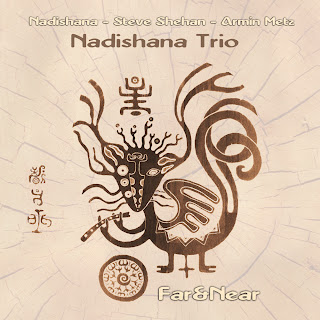 The Germany-based Nadishana Trio is composed of Nadishana from Siberia; Steve Shehan from the U.S.; and Armin Metz from Germany. The album contains far-reaching sounds, melodies, and rhythms from various cultures. The wholly instrumental album contains a wide variety of wind, percussion, and limited string instruments. The only familiar instrument--for the most part--is the piano. The others include bansuri, kendang, duclar, utar, lekembe, handsonic, tambujira, hadgini, knong wang, and other diverse and obscure instruments seldom heard on any world music album. The contemplative tones are interrupted by some energetic percussion steeped in the traditions of Europe, Middle East, and South Asia. The 'far' and 'near' concept is very appropriate, as many of the instruments originate from several world regions--as well as performers themselves. At any rate, the effort is memorable and unlike anything previously released in ANY genre. The Nadishana Trio are perfect for improvisational, percussion, New Age, and instrumental ethnic music fans with a desire for something above par. Far & Near is as close as one gets to perfection. ~ Matthew Forss
Posted by Matthew Forss at 3:37 PM