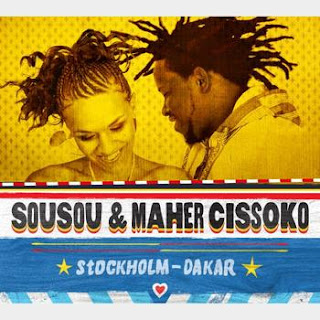 The link between Sweden and Senegal is not too distant, as Sousou & Maher Cisssoko are evidence of its close association--at least from a musical perspective. Stockholm-Dakar is a thrilling album with loads of mbalax drumming and kora melodies with young, fresh vocals in Mandinka, Swedish, Wolof, and English. The liner notes contain English translations. The fast rhythms of the opener, "Nama Nala," as well as "Bamba," "Badia," and "Sunkotou Njiima," keep up the brisk pace. Sousou, a singer and guitarist, hails from Sweden, while Maher, a kora and calabash artist, hails from Senegal. The music is steeped in the griot traditions of West Africa. Anyone with a passion for kora music should acquire the album. Though, anyone familiar with West African music will eat it up. Add a little kora with ngoni and a dash of sabar, and you will have a delicious mix of Senegalese music on your plate. ~ Matthew Forss
Posted by Matthew Forss at 12:38 PM