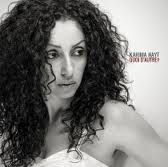 Algerian-native, Karima Nayt, is a more traditionally-inclined Kabyle singer than her fellow countrywoman, Iness Mezel. The folkish, fluid melodies are interrupted by nomadic guitars and upbeat percussion spanning North Africa's camel routes, France's guitar music, and the vocal melisma of Ofra Haza. Karima's mature voice floats effortlessly across the tracks with a bit of reservation to allow the instruments some room to expand on the vocal patterns. The sincerity in Karima's voice resembles the same clarity as Souad Massi with the sensuality of France's Carla Bruni. At any rate, Karima's songs are heartfelt, classic, and timeless. The thirteen tracks span Karima's eclectic and linguistic ethnic background. Some of the songs are reminiscent of Spanish, South American, or Portuguese-type music with a strong, classical--almost fado-esque--presence. Nevertheless, the music is not a fusion project, but a wonderful journey through the folk music traditions of Algeria's infamous Mediterranean coastline. ~ Matthew Forss
Posted by Matthew Forss at 3:21 PM