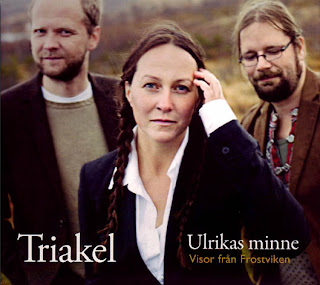 Sweden's most talented and beautiful vocalist, Emma Hardelin, lends her vocals and fiddle-playing on her latest release. Inspired by the music and folk traditions of Frostviken, Sweden, Ulrikkas minne... is a glorious album of folk fiddling with a dash of harmonium, bass, and guest vocals. The folk traditions are similar in style to Triakel's earlier releases; yet are a far cry from the amped-up, Nordic folk-rock of Emma's earlier Garmarna days. However, a new Garmarna release would be welcome in the near future, but that is a discussion for another day. The Swedish fiddling is happy, free, and spritely. Emma's vocals shine, too. Anyone interested in Scandinavian folk fiddling traditions will find solace in Triakel's new fifteen-track release. ~ Matthew Forss
Posted by Matthew Forss at 11:20 AM