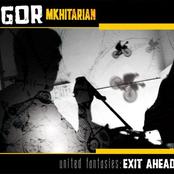 Armenian rock and pop music is not as popular as other forms of European music around the world, but Gor Mhitarian and his band are going to change that. The guitar, piano, drums, and percussion-based band has drawn comparison to David Gray and the Dave Matthews Band. With a voice like David Gray, Gor Mkhitarian remains uniquely Armenian, but in a rock and pop sort of light. The catchy melodies and fun lyrics are definitely worth a listen to anyone interested in contemporary music from the Caucasus. The music reflects a bit of Russian folk/rock, too. At any rate, Gor Mkhitarian is a fabulous singer and guitarist with an innate ability to create moving and desirable songs that will live on for years. ~ Matthew Forss
Posted by Matthew Forss at 1:07 PM