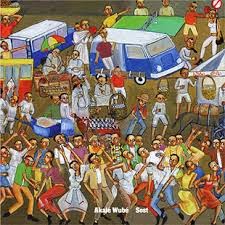 Akale Wube's third album is aptly-titled Sost, which means 'three' in Amharic--the official language of Ethiopia. The music is highly groove-based and follows the early traditions of Ethiopian jazz, which is not too unlike the popular Ethiopiques series. About half of the music is based on traditional recordings and cassettes found in Ethiopia, while the other half of the songs are original compositions. The emotive vocalist, Genet Asefa, leads a few tracks with her seasoned voice in line with tradition Ethiopia music. The blurt of a trumpet, the beat of a drum, and a jazzy melody with Afro-jazz flavorings rounds out the gist of each song. However, each song brings something new to light--whether it be a hook, a sound, or a rhythm. Akale Wube know how to tease the feet with danceable grooves and lush sounds. This is another acclaimed album. ~ Matthew Forss
Posted by Matthew Forss at 10:21 AM